It's Harder Than It Looks

Anyone who has ever watched cycling on TV has probably had the same thought as me: "It doesn't look that hard". But if you've ever gone out and tried to DO it, you've no doubt found out rather quickly that it's a lot harder than it looks.
I'm not talking about the easy, social riding that most amateurs are used to doing (although these rides can also be difficult if you are not used to them). I'm talking about race-paced, all-out efforts. Anything from a 2 hour road race going up and down big hills to just over one minute all-out on the track. When watching other people perform these efforts, they look 'easy' and you can picture yourself doing them with similar ease. But lift one leg over the top tube of your bike and try and pound out a similar effort with the same type of result and you will be unpleasantly surprised! 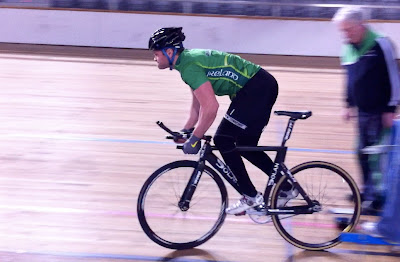 I am reminded of my first foray into track cycling. I had seen it many times on the television and thought it looked relatively simple. I mean – I had sprinted on my road bike many times so figured it couldn't be much harder to do it on the track. Boy was I wrong! Certainly riding around the track at a comfortable pace is easy enough, but as soon as you up it to race pace, the pain and suffering, even for such a short effort, is  immense.
As one of my teammates said to me recently: "If it was easy, everyone would be good at it". I suppose that is what separates the best riders from everyone else – the very best make it look easy. They are able to ride through the pain, hiding their discomfort and the suffering that they are experiencing, and cross the finish line ahead of the rest, often with a smile on their face.
It has been many months since I last rode and raced on the track, but have recently started training for this discipline again. Thinking back to the last time I raced, the memories of the pain and difficulty and the effort required had faded and I was left with a significantly reduced perception of what is required to go fast (and stay fast) on the track. It was a huge shock to the system the first time I got back on the track and put the hammer down in an attempt to go fast. Sure, I was able to go fast... but not for long. I had forgotten how much real effort is required to maintain the high speeds associated with track cycling.
Nevertheless, after several sessions training on the track, I once again have grown accustomed to the feeling of going hard and fast for a short period of time and once again know the level of pain and suffering needed to succeed. Fortunately there are still several months to go before I have to worry about racing on the track, so have lots of time to hone my skills and refine my efforts.
All I can say is – I have a huge amount of respect to the cyclists who make their efforts seem easy.
at 09:10

Women or Bikes: You Can Only Ride One 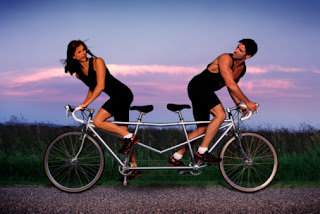 Having passion in your life is, without a doubt, a good thing. I think it is important that each and every person have something in their life that they feel strongly about. Something that drives them on and makes them want to be a better person. But when one passion gets in the way of another, serious problems can arise.
It was almost exactly two years ago that my wife walked into the bedroom and declared that she wanted a divorce. At the time I admit to feeling an overwhelming sense of relief, despite knowing the logistical and financial hardships that lay ahead. It wasn't that I didn't care about her, rather it was that my passion (cycling) had become incompatible with her. I even remember the divorce papers listings amongst of the reasons for the breakdown of the marriage 'the fact that I kept my six bikes in the house'! (Which is odd, because I didn't own more than one bike at the time!)
Women and sport have long mixed like oil and water. Rare is the women that not only appreciates sport – but also participates in it. How many men have partners that simply tolerate their love of sport – that 'allow' them to go to the pub once a week to watch the football match? Or give them sufficient guilt-free time to train adequately for their cycling pursuits?
How many men have to hide the true value of their cycling purchases from their wives for fear of recriminations? On the cycling forums we often talk about the tricks we use to cover our tracks – from the very popular method of having all cycling purchases delivered to our offices instead of homes, to having separate paypal or bank accounts to fund such purchases. At times it seems more complicated than an international money laundering scheme!


Another common complaint I hear from men is not being able to go out for a ride whenever they want to. I have some very good friends who I constantly badger to come ride with me, but they can't because they are always tied down to the responsibilities of their partners or children. It's no real surprise that I have become a significantly better cyclist since I moved out on my own and began to live the bachelor life again.
I know life is a series of compromises – and each person must chose what aspects of their life to value over another. I place a high value on my cycling time – it is the only thing that truly keeps me motivated, interested and passionate.
Looking back on the period I was married (and actually interested in cycling), I suppose the problems began to arise when I found myself too tired a lot of the time to do anything else. You see – after a 4 or 5 hour bike ride, the last thing I wanted to be doing was to be rushing off to go shopping. Not that I ever wanted to rush off to go shopping, even at the most rested of times!
And to further complicate matters, now that I am training and racing regularly with the Irish team – I have to find more hours in the day to ride and have to travel for training camps and races for several months out of the year – often being away for weeks at a time. Having time left over to take a holiday with the family would be a rare luxury.
Now – I know it can be done. In fact, many of the members of my squad somehow manage to go to work, train, raise families and probably even get away with purchasing whatever bike bits they want and need. They have found that delicate balance between their home lives and their cycling aspirations. They obviously have very caring and understanding partners. I just wasn't that lucky.
Even in more recent times I have tried to find this balance between sex and cycle, between my passion and love. When I entered the dating world again, starting with something of a fresh slate –  I went out of my way to try and find a woman who would not only appreciate and understand my love of cycling, but also participate in it with me.


I joined a popular online dating service and boldly proclaimed my love for the two-wheeled machine going as far as to say that "if you own a bike and actually use it, that would be a huge bonus". I recall receiving many replies from potential partners, all who seemed to own a mountain bike that they used to carry them to the pub on Sundays. Not exactly what I had in mind! Even the occasional women who owned a road bike and was determined to show me that they rode it was soon left far behind, complaining that the speed was too fast and the hills too steep. And this was only after the first five miles (and at a pace that to me, was barely above walking!).


Although I had limited success in this endeavour, I eventually managed to meet a lovely woman who actually owned not one, but several bikes. For the briefest of moments I thought I might have found my true happiness. Not only could she (more or less) keep up the pace, but insisted we tackle the steepest hills in the area. She even came to see me race (although when she tried to drag me off to the pub afterwards, despite me being barely able to walk and stay awake, I had a feeling that things were going to go pear-shaped at some point). Sadly, when the weather turned cold, I seemed to find myself on the roads all alone again. It seems she was a fair-weather cyclist. I quickly lost interest.
Or was it something else? Was it the guilt I felt when I was spending time with her instead of training? Perhaps I was uncomfortable with the added temptation – being led to overeat and drink alcohol – which would slowly derailing my long-term goals? Was I looking ahead to the future and thinking about how I was going to explain that I wouldn't be able to take a holiday with her – possibly for the next two years? That my life wasn't really my own to share for the time-being? I don't know the real answer.


Oddly enough, my ex-wife and I are still friends (in fact, we are still married as we just never got around to getting divorced). It took us splitting up for her to come to see me race (and was pleasantly surprised when she did). She claims she always supported my cycling dreams and pursuits. And while I know she thinks she did, deep down inside I know she was jealous of the time I dedicated to cycling... instead of to her. Sport can be a fickle mistress.


My very first introduction to disability cycling was by a married couple – both of whom are medal-winning Paralympic cyclists. From the outside, looking in, they have the ideal life. They live together, love together and train together. I do not know what other challenges they face, but on the surface it seems to me like a match made in heaven!
What I know is this: that somewhere out there is the perfect woman for me. One that can give me the time and space I need to achieve my goals. Failing that, I'll probably give up on cycling before I give up on women!
(I'm off now for the next week at my first training camp of the year but will have an update when I get back.)
at 15:24