After a LOT of driving and a quick stop off to ride the Mortirolo climb in Italy (hardest thing I've ever done), it was off to Switzerland for Round 2 of the Paracycling World Cup Series. Video of me DESCENDING off the Mortirolo climb. Short but gives an idea of how tough it was going up!:

The Swiss World Cup was always going to be a mixed bag for me. On the one hand, it featured a pan-flat out-and-back TT that suited me perfectly. On the other hand, it also had the hardest road race course we've ever raced on, with 3 different climbs of varying lengths and gradients to tackle each lap. But as I'd already scored some good qualification points in the Italy World Cup, this weekend was all about pushing myself to see what I could achieve, but without the pressure of needing a result.

The only thing I was worried about for both the TT and road race was the weather. If it stayed dry it would be much easier. In the wet - not as much. Although the TT was flat, there were a few technical turns near the finish that could cause havoc in the wet. And the road race.... well with screaming descents, the wet roads had the potential to really mess things up!

The TT day rolled around and as soon as I threw my legs over the bike to warm up I knew it was going to be a good day. All the right sensations were there. The weather was playing nice and even the wind was blowing a light breeze instead of the howling head/tail it had been in training the day before.

I rolled down the start ramp and quickly got into my aero tuck - making sure not to go too hard right from the start. Even though it was a short TT, I had to make sure not to overdo it for the first few minutes. I settled into my rhythm nicely and as I hit the long, straight stretch of road, started to put the power out nicely.

Hitting the turn at the far end of the course, I accelerated back towards the start/finish, still feeling strong. The nice thing about long, straight roads is you can see up ahead and the people you are chasing. Approaching the last few KMs, I was surprised to see I was catching my minute-man - the guy I had pegged as my main competition. If I had caught him already, I was either having a great ride or he was having a horrible one.

As we hit the technical section at the end of the course I had to sit up a bit so as to not tangle with him through the corners, but managed to power past him on another straight stretch before the final turns into the finish.

I crossed the line and waited. There were still 2 riders to start after me but as they crossed the line it was confirmed - I had won again. And by a huge margin: over 1 minute! Turns out I was having a great ride!

After a day off, it was back to business: road race time. Unfortunately the weather decided it wasn't go to play ball this time. It was cool and raining. It meant it was going to add to the misery of trying to hang onto the climbers in the race, and wasn't going to be able to make up ground on the descents.

The race started and I was immediately on the back foot. As we made up way up the first drag I was already feeling under pressure. We made the turn onto the first sharp climb and as predicted, the race exploded. Riders hammered their way up the sharp incline and I started going backwards. I opted to ride a steady pace - thinking I would regain contact with the group over the top. Huge mistake.

Turns out I was only 11 seconds slower than the main group over that climb. But that was enough for a gap to form. And I never managed to close it again. So now it was going to be about seeing what I could do on my own.

I rode on and came up on another rider - a guy I like to call 'my nemesis'. We have gone head-to-head several times in sprint. And he has always beaten me (although he HAS won the Worlds time in the road race). We worked together to try and catch the riders ahead (to no avail) but more importantly to keep ahead of the riders behind us.

We managed to catch up with his teammate and from that point on I felt like the 2 of them were trying to work me over. One would jump up the road and if I chased after, the other would sit on my wheel and jump past me if we caught up. I just kept riding within myself though.

As we hit the last long climb the final time I decided to push on as hard as I could. The lighter of the two riders powered off up the climb ahead of me. I tried to hold his wheel but soon realised I would blow if I did. I settled into a pace I could sustain for the duration of the climb.

I looked behind me to see I had dropped the other rider. I kept pushing on, thinking to myself that I wanted to break him on the climb. No way did I want to bring him to the line again with me.

As we neared the top, he had closed the gap a little, and as the road flattened out - me managed to ride back up to my wheel. I had decided that no matter what, I would attack on the final lap in a certain spot - and true to myself I did so. I jumped off his rear wheel and sprinted up the road. This gave me a head start into the last descent towards the finish. I could see his teammate up ahead (who wasn't able to descend as fast as us).

Unfortunately, slowly but surely the chasing rider pegged me back again. And as we hit the final sharp bend in the road, I got my line wrong and had to hit the brakes. He dived down the inside of me and made the run towards the line. I kept my cool and accelerated after him. As we got to 500m to go, we caught and passed his teammate. With about 100m to go, I was right on his wheel and he was looking back to see where I was. And I jumped again - using the slipstream to power past him and taking the 'win' from him. 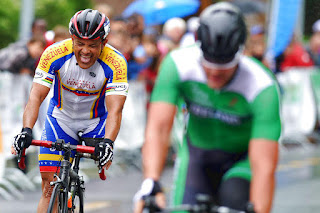 OK, so it was only for 10th place but it was still a victory of sorts! I had finally beaten him in a sprint. And that... was enough for me!

Very quick update on the first World Cup of the year.

Flew out to Italy on the Tuesday to be greeted by some pretty warm temperatures. Even ran into fellow Para-T rider Rik Wadden in the airport!

Drove straight to the hotel, built up my bikes and headed out on the road for a quick look at the TT course. I had heard it was ‘hilly’ so was a bit concerned. But after riding it I realised it wasn’t too bad at all! Short at 12.5km and with no significant climbing, might actually give me a shot at doing well.

Spent the next couple of days getting more familiar with both the TT and road race courses and trying to get used to the heat. Heat really is my enemy and was more worried about that than the course itself.

I found it difficult to get any significant power out on the bike in the days leading up to the TT so was worried that something was wrong. When I woke up (early) on race day, I still had doubts as to how I would perform but all you can do is put them out of your mind and get into race mode.

And so before I knew it I was rolling down the start ramp and out onto the course. Even though it was only 9:30am, it was already 28 degrees. I was thankful the TT would be over quickly!

Within minutes I knew I was on form. It was a struggle to hold back the power and not overdo it from the gun. Always a good sign! I settled into my rhythm and just got on with it. It was a real pleasure to be riding a 100% closed-rode TT - so you are able to use the entire road and pick the best lines and surfaces.

As I made the final turn into the long uphill drag towards the finish (around 3km to go), I spotted 2 riders up ahead - my 1-minute and 2-minute men. I expected to catch the 2-minute man as he’s quite slow, but definitely did not expect to see the other rider (Simon Price who had beat me in the last TT in Italy). It meant I was probably having a good ride.

1km to go and I just piled it on, leaving it all out there. Onto the final few 100 meters across the cobbles and across the line. Most of the other riders were all there - collapsed at the side of the road from he heat and effort. It had been a tough ride for everyone.

A quick check of the timings and it was confirmed: I had won by less than 2 seconds! I can’t honestly say I expected to win, but it was both a joy and relief! 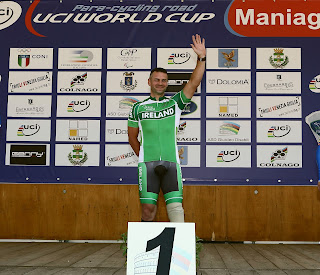 A couple of days later and we were back for the road race. 9 laps of the mostly flat circuit, with that same section of cobbles to negotiate each lap. I was worried about getting through some of the tight corners safely but in the end it worked out OK.

Like many of the races, it was fast and furious from the start. Several attacks straight away with a few riders initially getting away. I stayed near the front all race - and was able to help bring back the first escape, but when 2 of the riders got away again, there was nothing I could do.

From this point on, there were very few people willing to work at the front to bring back the 2 escaped riders - and so their advance grew with each passing lap. I could sense it was now a race for 3rd place - and it was going to be a bunch sprint.

With less than a lap to go I was still staying near the front but as we passed through the feed zone I felt my leg cramp up. I had to ease off the pedals to try and stop it getting worse. I immediately dropped back in the small bunch. As I moved back up, I was wary of the cramp coming back. 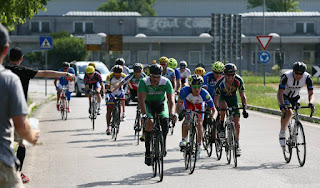 And so - we were into the last km - a straight road leading towards one last right hand turn onto the cobbles and a sprint to the finish line. I pushed on, trying to get to the front and into that last corned before the other riders, knowing this would be key to a high finishing position. But as we neared that turn I got boxed out - with riders on other side of me and nowhere to go.

We made the turn towards the finish and I sprinted for all I was worth, but sadly (for me) I ended up in 8th place (6th place in the bunch sprint). Nevertheless, finishing int he bunch is a step forward, especially after riding hard at the front all day.

Next up was the World Cup in Switzerland. Details to follow!