It’s Sunday night and I’m sitting in the Rome airport. The first Paracycling World Cup weekend has just finished and I’m waiting to check into my flight home to the UK. It’s been an eye-opening weekend for me, for many reasons and probably just what I needed to help me if I’m going to have any chance of winning medals in London.

The World Cup is a three-stop series of road races and time trials taking place in Rome, Segovia (Spain) and Canada. They are run on a variety of courses, ranging from pan-flat to gruesomely hilly and offer riders with different specialties to showcase their talents. But more importantly, they are also a chance for riders to test their form against the best in the world as we al build towards the Paralympics in London. Some riders are still chasing selection by their national governing bodies to be a part of their Paralympic squads in London, whilst other riders use these races as training only. Therefore, people will come to them in vastly different condition and with different goals.

For me, it’s an opportunity to see how I’m riding at the present time in relation to the people I think will be my biggest competition for medals in London. I obviously was hoping to win, especially as this World Cup represented my first major international outing in the Rainbow Jersey (as time trial World Champion), but it was more important to not lose by a significant margin. Small mistakes can be fixed with relative ease. Larger ones would cause alarm bells to start ringing and could seriously derail my larger plans for London.

Getting to Rome for the race proved to be a bit of a challenge. I had to get up at 3:00am in order to make the drive from my house to the Birmingham airport where I met one of my other UK-based teammates. By the time we finally managed to get through the massive queue and check in our bikes and bags, we had to rush just to make it onto the plane on time. Throw in a two and a half hour flight, another two hour wait to be picked upon our arrival in Rome and an hour drive to the hotel, we were quite tired by the time we finally made it to our destination. Then we had to build up our bikes and head out to the time trial course to do a quick ride on it as we would be racing on it the following morning.

It was a long day of travelling to say the least and to find ourselves up early the next morning to race was not exactly the best preparation for a major international race. Still, we all gave it our best shot. As World Champion I was the last in my category to start. There was really just one rider that I was keeping my eye on and was able to get my split times in relation to his each time I passed the start/finish line of the three-lap pan-flat circuit. On paper, it was the ideal course for me and I had expected to do well. But in reality, the toll of the previous day’s travelling took just enough of my edge away that in the end,I only managed to finish fourth.

The top five riders were only separated by a scant 15 seconds so it was obvious that many of the riders had come to the race in good shape. My goal going into the race was to finish in the top three – and to not lose by more than 30 seconds. So although I didn’t make the podium, I was close enough to it to know that with slightly better preparation, I should be able to win. Four of the top five riders  were also the top four riders in the World Championships so there were no big surprises there. However, the rider that finished second on the day was a huge surprise to me. Last year at this time I was beating him by up to three minutes and now he had finished ahead of me. But this is why we do these events – to see who has improved since the previous year and to gauge how much harder I will have to work to succeed in London.

Sunday brought about the dreaded road race. I say dreaded, because I never seem to do well in these races. I always manage to get dropped early on (usually from an inability to get to the front of the pack early enough to avoid getting dropped on the first climb or coming out of the first corner) and so dread riding these races. And true to form, I was dropped from the lead group almost straight away. It didn't help that I started the race at the back of the entire group (I have no idea how they came up with the starting order - all I know is my name was one of the last to be called).

I ended up in a small group of riders and we worked together the entire race to stay ahead of an even slower group behind us. I made the incredibly stupid mistake of going for my final sprint to the finish line... one lap early! Imagine my surprise when I crossed the finish line, ahead of everyone else in my little group, only to hear the bell ringing designating one more lap to go! At that point I had nothing left in my legs, so was destined to finish last in my group as they could count to 11 while I obviously couldn't.

And so, I am reasonably happy with the weekend. Mistakes were made but also lessons learned. Perhaps some of my rivals will look at my results and start to think my best days are behind me – and start to underestimate me. The next stop of the World Cup is in a few weeks in Spain, and I plan to arrive there much better prepared – and this time will be laying down a marker for London. Or so I hope!
at 07:59

Racing to Train and Training to Race 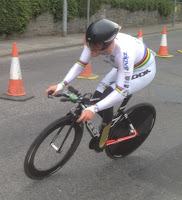 It's been a busy few weeks but I thought I should do a quick post to tell people what I've been up to. The last month has seen me on a lot of airplanes and a lot of start lines. As the road race/time trial season starts to heat up, so has my training.

I have started racing locally on a regular basis. Tuesday nights see me doing local road races. Mostly in a series that I ride in every year (TLI - The League International). They run a series on a local circuit. All TLI races are run in age brackets rather than by how many points you have on your licence (like British Cycling). So it means I can race against people my own age instead of youngsters who tend to be a lot faster than me. Still, the seasoned veterans are not exactly walkovers either! These race usually last about an hour and a half and are great for testing your race skills and getting in some early season experience.

Wednesday nights mean I'm off to my cycling club's weekly 10 mile time trial. I like doing these because they are a good test of my form. I've done the course dozens of times over the past several years so I can easily judge how well I'm riding based on the times that I do. The weather in general this year has been pretty shocking though, and it's been hard to get a good, dry ride in! Coupled with equipment problems, I haven't had many fast times yet this year on the course, but it's all good experience and good training. Today looks to be dry for a change so maybe I'll do well tonight! 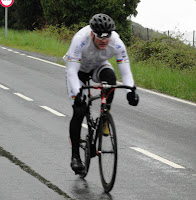 I flew out to Spain for a weekend to ride in a mini-stage race in Bilbao. It is basically two time trials on the first day followed by a road race on the following day. It rained horribly on the first day making the twisting and steep descent on the time trial course a huge challenge. I hadn't seen the course before racing it and the wet roads and terrain meant that I should have used my road bike instead of my time trial bike. It was basically a hill climb and doing it on a TT bike wasn't the smartest choice. I swapped to my road bike for the second TT stage which certainly helped a fit bit! In the road race the following day, I failed to clip into my pedals at the start fast enough, and by the time I had, most of the pack had already sped off up the road! My race was over before it started. Overall a poor weekend for me. 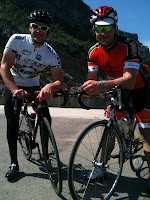 I flew home from Bilbao on Sunday night, giving me just enough time to pack up again for my flight the next day to Majorca with the rest of the squad. We spent a week there at a training camp. Our time (as usual) was split between the road and the track. We had glorious weather for the whole week, which made the road miles fun and took our minds off the fatigue that built up over the course of the week. It was also really great to be back on the track and the whole team was putting in consistent and superbly fast times. No one has lost anything on the track since Los Angeles and the Track Worlds.

The return from Majorca brought me back to more wet weather and more racing. In addition to the mid-week races, there are also now events each weekend. For instance, last weekend I had a road race on the Saturday morning, the hopped on a plane in the evening, flew to Belfast and participated in the Celtic Chrono (a 22-mile time trial around the streets of Belfast and surrounding areas) on Sunday morning. And then flew home that night! 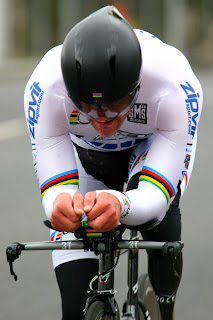 And of course, in addition to all the racing, I still have to fit my training in. Most days I actually have to train in the morning before racing in the evening. Unless there isn't time (like weekends when you race in the morning or when it's an important race that you want to be fresh for). I find myself tired quite a lot, but I also am feeling stronger and fitter by the day. My races are improving and my TT times are coming down. Everything is on schedule.

Next up (of major importance) is the first World Cup of the year. Next week we fly out to Rome for 2 days of racing. First up is a flat the trial followed by a road race only 500m from the Coloseum! The TT will be my first major target of the year and I aim to show my competitors that I am still the man to beat. It's perfectly flat and mostly straight – my kind of TT – so I won't have any excuses if I don't put in a good performance. All the Paralympic medal contenders will be there and it will give us all a chance to check each other out and see who is riding well.

So that's it for me. I'm off to get some training in now before my race tonight. Will be back soon as I have some new equipment to write about!
at 03:43