Rewind: Let's start at the beginning. 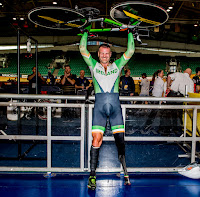 It's been a while. A long while. But I'm still here and still going strong. Sort of.

So let's recap. Last I posted (back in 2016), I was about to re-attempt the Paracycling Hour Record in Manchester after a failed attempt the previous year, when my front tyre blew 42 minutes into the effort. Happy to report (and is old new by now), that I smashed the existing record, riding 43.133km. So ticked that box off!

2017 you ask? A great year. I won all three World Cup time trials, and placed 5th in the World Championships. The World's course was a bit lumpy for me, and still only finished 14 seconds off the medals.

Now - 2018. My "annus horribilis". Everything that could go wrong, did go wrong. I trained well through the winter with an eye on the time trial title at the back end of the year. I hadn't planned on riding track in 2018, but circumstances convinced me to give it a go.

At the end of 2017 I was elected by my Paracycling peers to represent them on the UCI Athletes Commission, and I was also subsequently appointed to the UCI Paracycling Commission (a real honour for me). Both the Commissions give me the chance to speak up at the top level about issues important to cyclists. And in particular, being on the Paracycling Commission gives me a real chance to influence the direction of Paracycling our the coming years. I've already seen some of my ideas embraced and implemented, and has given me renewed faith in the the UCI's support of Paracycling.

All this to say, my first Commission meeting was schedule to take place in Rio in early 2018 - at the Paracycling Track World Championships. My thought was - if I have to fly all that way for a meeting, I may as well do some racing. I decided to race, but it wouldn't be a focus and I wouldn't do as much specific track prep as in previous years.

The training sessions that I did do on the track went well. I was producing similar power numbers as previous years and was confident of putting in a decent performance. I wasn't going there to win medals, but hoping for top-10 finishes and to score some valuable Tokyo qualification points. Everything was on track (pardon the pun) until about 3 weeks before the competition. I discovered I had an infection in my foot which would require a few days off and a course of anti-biotics. This marked the turning point of my year.

Due to the infection my training and preparation for the World Championships suffered. But I was still hoping for those top-10 results. But any chance of success was well and truly scuppered when I picked up another infection 2 days before flying out to Rio. It meant I would be racing whilst still taking anti-biotics and fighting off the infection. 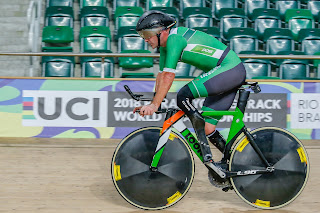 And so it went. I had my worst World Championships ever - finishing last or close to last in all my events. My times were diabolical and miles off what I was capable of. In fact, my worst results since I started racing. So disappointing and demoralising.

I took it on the chin and got to work on the main goal of the season: time trial World Championships. I decided to focus on training for the rest of the year rather than the steady diet of racing I had done in previous year. I headed off to Teneriffe for a long block of road miles and to clear my head. Very much enjoyed it and fell in love with my bike all over again.

I had another trip to altitude in France. Always a tough proposition. The riding is 'fun' in the mountains, but the physiological demands of riding in the thinner air play havoc with your power output. I always just try and get through these trips with the reward of better fitness and power output awaiting me back at sea level as my motivation.

All in all, I spent about 8 weeks riding my road bike up mountains. Unfortunately, each time I cam e home and hopped on my time trial bike to race, I was terrible again. I hadn't done enough training and racing on my TT bike and was missing the specificity I needed. I felt uncomfortable in the position - something that has never been a problem in the past. I was completely out of sync with my bike, and it showed in the few local time trials I tried to do.

In order to maximise my chances of success at the World Championships, I decided to head there 3 weeks early and train (on my TT bike) on the actual course. It would give me a chance to prepare specifically for the race, on the course and on my bike. I've done this in the last with great success. 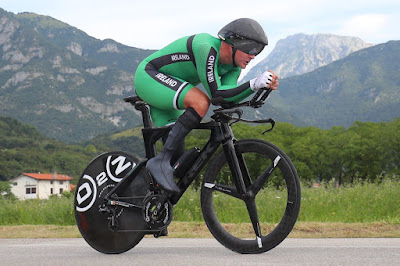 I was able to ride the course over and over and work out the best strategy to attack it on race day. I did race simulations and crunched all the numbers. The first part was a steady, albeit gentle, uphill drag, culminating in a short and punchy hill, before the course looped back to the start, mostly downhill or flat. I knew I had to get up and over the first part of the course as quickly as possible and back onto the more suitable terrain if I wanted any chance to succeed. I focused all my energies into preparing for this part of the course.

On race day, I did exactly what I had trained for: I got up and over that hillier part of the course as fast as I could. And yet, I still lost a minute in time to the fastest riders! Simply put: I was too heavy for my power in comparison to the best riders. On the second part of the course, I still lost time, but in general I matched the top riders on any flat or downhill section. And in the end, I only managed 12th place.

There are serious repercussions to my results this year in regards to staying on the Irish team and my future funding. In short, my funding is gone and my place on the team hanging by a thread. I'll go into both these things another time, and discuss the fallout (mentally) from the season that was. Suffice to say, it isn't pretty. But I find myself now, several weeks later, refreshed, reinvigorated and motivated to carry on and right the wrongs of 2018.

Thanks for reading and I hope to start writing and posting on a regular basis once again!

(If you've read this far, and want to help me carry on to Tokyo 2020, can donate ANYTHING here: https://www.gofundme.com/qnnmsj-tokyo-2020-paralympic-games)