We're deep into Autumn (Fall) now and Winter is officially fast-approaching. The temperatures are dropping significantly to the point where anything over freezing is considered a 'warm' day in these parts. Daylight fails to exist by 4:00PM on most days and it's almost always a rush to get back in the house before nightfall. In cycling terms, it's the worst time of the year.

No matter how hard-core you are and how little the cold affects you, it's still a struggle to leave the house and brave the elements for a ride outdoors. Many cyclists spend this time of year in the 'dungeon', a corner of a shed or the garage (or if you're really lucky – the living room), perched upon their bike on a turbo trainer, a high-powered fan blowing stale air into their faces as they struggle to find the motivation to get through an hour or more of pedalling.

Training in the summer months is easy. The weather is (usually) better, there's loads of daylight extending the hours you can train outdoors without lights on the bike, and there are opportunities to race on a weekly basis. It's much easier to train hard when you have a race to look forward to at the end of the week and a way to check your progress. But in the winter there is no racing on the horizon for months. Just monotonous and uninspiring training sessions to plough through.

So... how do you stay motivated through this dark and cold time? For me, it's easy. The sting of losing out in the Paralympics is still fresh in my mind and the knowledge that in order to win the World Championships next September I must start training and get focussed NOW is all I need to get me going. I didn't lose by much in the Paralympics, and a lot of that came down to bad timing and bad planning. Physically I had the tools to win, I just failed to get it out there on race day. So closing the gap to get back to the top isn't a huge ask – it's just a matter of making as many small improvements as I can.

Going into the 2013 season I feel a renewed sense of hope and direction. Despite (still) being the reigning World Champion (due to there being no road and TT World Championship in 2012), I don't feel the same weight to perform as I did in 2012 and don't feel like the 'favourite' any more. People will be looking closely at the riders that medalled in the Paralympic Games and will tend to overlook me. Not having that external pressure to perform will help me greatly. There will still be the same pressure I put on myself, but that... I can handle!

In many ways I feel like I'm stepping back in time a few years – to when I was an unknown rider. Back then I believed I had what it took to win, but because I was overlooked by most of the competition, there was less pressure to win medals. Every ride (especially medal-winnng ones) was a joy. Not only afterwards, but also in the lead-up. I feel like in 2013 I'm going back to that ethos.

Even my approach to preparing will be new. I've had great success and great failure at top-level competition now. And I have a much better understanding of what works and what doesn't (for me). I'll be in a much better position to avoid the mistakes that have lead to poor performances and focus on the things that have worked. Even my approach to training and diet is going to be new and better. My focus will be squarely on winning and I will let outside influences affect me a lot less.

Of course I will still have obligations outside of merely riding my bike. But I will learn to say 'no' when it doesn't suit me. I'm lucky to have most of my sponsors sticking with me next year, and (hopefully) with the addition of a few more key players I can forgoe the chase for new sources of equipment. I should have the best possible equipment at my disposal (and for the entire year) which will just make my life a lot easier.

Lastly, 2013 is a year that is all about the road. There is no track cycling for me to compete in so my training and focus can be 100% on the event that I want to win (the time trial) and I won't have to split my training time between the road and the track. For me, this was a problem in 2012 – trying to be good at too many things at once. Jack of all trades, master of none.

2013 hasn't quite begun yet (on the calendar), but for me – it started a while ago. And I can't wait to get back out there and show the world what I've got. This is what it's all about: 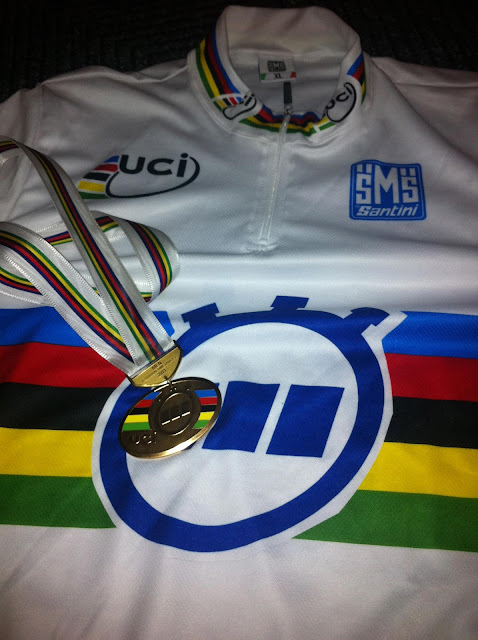 
At some point in every cyclist's career, they are going to experience a fall. It's pretty much inevitable, whether it's physically falling off your bike, a fall in form, or as we have seen recently in the case of Lance Armstrong, a fall from grace. Picking yourself up, finding a way to heal and carry on after a fall can be just as traumatic as the fall itself, especially if it was serious. How an athlete approaches the recovery process will determine their longevity in the sport.


At the London 2012 Paralympics I was unfortunate enough to experience falls on several levels. Going into the racing I was a favourite to win a medal as the reigning World Champion in two different events (time trial and individual pursuit). And yet, I walked (or limped) away from the Games without a medal. I experienced a fall in form at the wrong time. Nothing major, but enough to keep me off the podium.

And in my final race of the Games (the road race, in which I am not a specialist by any means), I decided to lay it all on the line and try a different strategy than I might normally have done. Rather than merely sit in the bunch and wait to either get dropped mid-race or lose out in the final sprint for the finish line, I decided I was going to try and spring a surprise attack right from the start. But my plan lasted all of about four minutes. I went screaming into the first hairpin corner at 40 miles an hour, lost control of the bike and ended up in a heap on the side of the road.

Being the competitor that I am, I immediately hopped up off the ground and attempted to get back into the race. My bike was somewhat mangled so it took a few minutes to try and get it working again. I was so focused on the bike that I failed to see that I was also somewhat mangled. Mostly just missing skin from where I had slid across the pavement at high speed. In the end I was able to get back on my bike but it was only partially functional, so just finished the first lap and had to pull out of the race.

I left the Games a broken man. No medals (I missed one by a mere 1/10th of a second in the velodrome), a broken bike and a broken body. But the one thing that wasn't broken was my spirit. I had experienced falls on so many levels, but it has only made me more determined to come back next year stronger in my desire to win. I will have to look at every aspect of my training and equipment again to make sure nothing is left to chance, and to learn from the mistakes that I made this past year, but I have every confidence that I will bounce back even stronger than before.

It took several weeks for the physical injuries to heal and the bike will be pretty easy to repair. The blow that my pride took will take longer to heal, but this is what I was alluding to at the start: how you let such things affect you can determine your longevity in the sport. If you can find a way to carry on and learn from these experiences, then you have a greater chance of thriving in sport. Sport (obviously) has a huge physical component to it, but the mental aspects are just as important.

And so as fall (or autumn as they call it in the UK) begins, I know that I have a lot of work to do. I want to be in Rio in 4 years' time but for now I am preparing for the 2013 season. One step at a time. There will be more falls ahead for me, but as long as I can continue to pick myself up, I can continue to succeed.
at 14:24