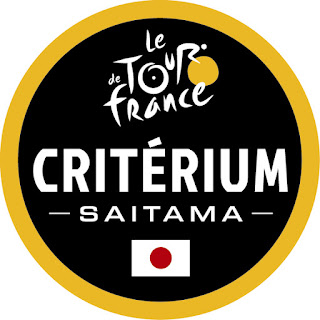 The email arrived in my inbox months ago. I was being invited to fly to Japan and take part in the Saitama Criterium and then race in the Japan Paracycling Cup. Both firsts for Paracycling in Japan – and both firsts for me.

There wasn’t even a second of hesitation as I hit the reply button and sent back my answer: YES. Without a doubt, yes. It is a once-in-a-lifetime opportunity and there was no way I was going to pass it up.

For those that don’t know – the Saitama Criterium is an end-of-year ‘race’ held in Saitama – on the northern outskirts of Tokyo. It is organized by ASO, who also run races such as the Tour de France. It is less of a race and more of a procession as riders follow a scripted race plan, lapping the 3km city centre circuit in front of the thousands of fans gathered to watch. Each year the Tour winner is there along with a host of other supremely talented riders. A few other local teams are also invited along for good measure.

This year as part of the festivities, they held a short time trial on the course, with one rider from each team doing a lap of the course as fast as possible. Along with the Pro riders, they also invited 7 women and 7 Paracyclists to take part. This is where I came in. I would be putting my best lap time up against the likes of Simon Geshke, Joaquim Rodriguez and yes… Chris Froome. It’s all a bit of fun, but it’s not every day you get the chance to race against top Pro riders, in front of 100,000 people!

Accompanying me on this epic journey would be fellow Irish (current) Paracycling TT and Scratch Race World Champion, Eoghan Clifford and our faithful coach Neill Delahaye.

The trip to Japan, despite the long distance, was relatively painless. Sitting on an airplane for 12 hours at a time is never a lot of fun but we got to Japan in one piece. I made sure I had very little sleep before the flight so was able to sleep a bit on the flight and arrived in Tokyo at 6:30am ready for a full day ahead.

We were met by our host, Ryuji Hiratmatsu who works with the Japan Paracycling Federation. Ryuji would be key to us enjoying our trip – and is also the key person behind the Japan Paracycling Cup that was taking place the following weekend. I’ll have more on him in my next post as he deserves his very own article.

The next few days would prove to be a whirlwind of adrenaline and jetlag. We spent a fair bit of time travelling between the hotel where we were sleeping and the hotel where our bikes were stored – just to be able to ride them on turbo trainers in a conference room! Unfortunately the city streets are a bit busy and not really conducive to proper training. All the while, trying to get over the 8 hours of jetlag we were dealing with! Fortunately we only had a couple of days of this to deal with before the festivities started.

Our second night there was spent mingling with all the other invited riders. It was a bit surreal hanging out in a hotel ballroom, eating sushi and drinking beers whilst Grand Tour podium finishers, Paris-Roubaix and Milan-San Remo winners and a host of other cycling gods walked past. I admit to be a fanboy, and I had brought a few jerseys with me to get signed by some key riders. It also gave me a brief chance to introduce myself and chat with them.

The next morning was the big day. Once again we found ourselves in our little hotel conference room, with (effectively) our backstage passes, waiting for the festivities to kick off. Pro riders wandered the hallways freely. At one point I saw Chris Froome sat on a sofa, so I headed over with my Yellow Jersey to get a signature. He invited me to sit down and we chatted for a short period of time as he (mostly) quizzed me on how I lost my leg and my cycling background. I’m not sure why but I couldn’t stop my leg from twitching – I was that nervous!

Eventually it was time to get the event started. We headed downstairs and through the hotel lobby. Throngs of fans had lined up for photos and autographs. Although not exactly for us! All the riders gathered outside the main entrance until Froome came out – and then it was time to leave. We headed out on our bikes onto the race circuit. We (myself and Eoghan) we mixed in with all the other riders. We pedaled around the race circuit in parade fashion – Froome and his teammates just off my rear wheel at times. It was surreal.

After a lap of the circuit we headed to our pit area – which was located inside a small concert arena. The race actually passes through the arena each lap in front of hundreds of seated fans all watching and cheering you on. After a brief introduction – the Paracyclists all headed back onto the course for another lap in front of the crowds. They probably had no idea who we were, but that didn’t stop them from cheering us on as we rolled past. Many of the fans at the edge of the circuit leaned out across the barriers, high-fiving me as I went past. I was loving every second of it.

After another short stop back in the pit area we were called up to the start area for the time trial. Again we rode around the circuit past the gathered crowds to a row of seats near the start ramp. I picked a seat in the long line of chairs and sat myself down to wait for my turn. As I sat there waiting, 2 of the Pro riders sat themselves down in the seats beside me to wait. Let’s just say it made for a photo opportunity I won’t soon forget. 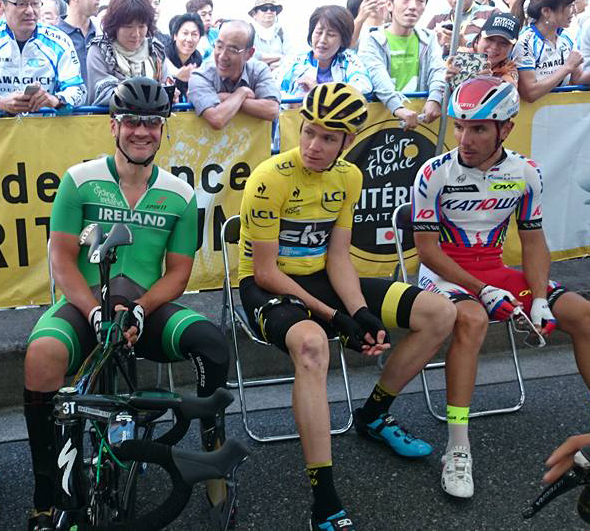 Finally it was my turn to get underway. I rolled up onto the start ramp and waited for the clock to tick down. 5-4-3-2-1…. and off I went. This wasn’t a normal time trial. It was just one lap of a race circuit – on a road bike as fast as possible. An all-out sprint to see how fast I could go around the 3km circuit. There were several corners to negotiate, a descent and ascent under an overhead road (twice), a 180-degree turn in the road, and a passage through the arena on soft rubber floor covering.

I was riding so hard that everything was just a blur. I was pedaling as hard as I could and could barely see where I was going at times. I could hear the cheers of the crowd as I sailed past but definitely not paying much attention. Just trying to get to the finish. And it was over before I knew it.

In the end, I didn’t break any speed records. In fact, I was one of the slowest of the Paracycling riders, but as the most ‘disabled’ that was to be expected. Furthermore, riding a road bike instead of a TT bike doesn’t do me any favours but all that is irrelevant. I was only 37 seconds slower than Chris Froome – and to me – that’s a win.

**Title is in reference to the Alphaville song “Big in Japan”.