Hanging up my wheels. Thanks... and farewell. 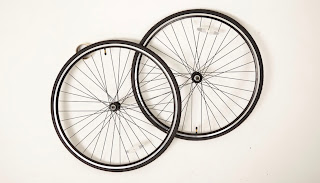 I’m not certain exactly when I fell in love with cycling. Probably somewhere around the age of 7. Since then, I’ve never been far from a bike. Even after losing my leg at the age of 21 I kept on riding, even just for fun.

In 2008 I had the privilege of briefly working for British Cycling and was exposed to their World-Class paracycling program. And watched as their riders won medal after medal in the 2008 Paralympic Games. It was then that I became inspired to get into the sport myself.

In 2010 I joined the Irish Paracycling Team. I was brought along to a week-long training camp in Newport on the track and did my first ever track races at the end of the week. And from there the journey began.

By the end of 2011 I had progressed rapidly up through the ranks and won my first World Championship title on the road time trial.  And followed it up a few months later with another title in the Individual Pursuit on the track in 2012.  These are perhaps my 2 greatest and favourite achievements.

Along the way there have been many ups and downs. The pain of losing a medal in London 2012 by a mere 1/10thof a second and the joy of a silver medal in Rio 2016. The disappointment of suffering a puncture 42 minutes into an Hour Record attempt – and the satisfaction of smashing the record a year later.

I had hoped to carry on and try to qualify for Tokyo 2020. Up until the end of 2017, things were progressing well. However, as I entered the 2018 season, I began to notice changes in my balance, coordination and general mobility. Walking became much harder and my cycling took a big hit. I had a big drop off in my power output which lead me to seek medical advice.

I discovered that I was building up fluid inside my spinal cord which was causing these issues. The only cure for the problem is surgery, and it’s complicated at best. I have tried to train to overcome the deficit but it’s clear that it affects me far too much.

After racing the World Championships in the Netherlands on the track, it was obvious that I am no longer able to compete against the best in the world ()certainly on the track) My best simply isn’t good enough any more. And with no funding and an inability to raise further funds even through things like crowdfunding, it was clear that it is foolish to try and carry on and see if my time trial skills were still at a competitive level. I have literally poured every last penny I have and every last ounce of energy into trying to succeed. I am broken both physically and financially.

So with immediate effect – I am announcing my full retirement from competitive cycling.

There are a many people that I would like to thank and shine a spotlight on. First –to my coaches Neill Delahaye and Kyleigh Manners. Neill has been my National team coach for many years. He’s been there through all my successes since 2013 and guided me to my Paralympic medal. Without him I never would have made it this far.

Kyleigh Manners (the man behind 42 Degrees Coaching) has been like a big brother to me this past year. When I needed a change and to re-invigorate my love of cycling, he offered to help me out. His training plans are hard, but designed to get the most of a rider. He helped get me a second chance – and for that I am eternally grateful. These two individuals managed to squeeze every last drop of talent I had left out of me.

To the national bodies of Cycling Ireland and Paralympics Ireland, and to Sport Ireland I also send my heartfelt thanks. Without their support, the sporting life of a Paralympic athlete would not exist.

A few other notable mentions from me: Xavier Disley at Aerocoach and Blake Pond at NoPinz. These two people are almost solely responsible for my success as a time trialist. The gains I made from an aerodynamic point of view, both from my position on the bike, and from the manufacture of aero clothing kept me competitive even when my power output could not match up to that of my competitors.

And to the various companies and sponsors that stood by me year in and year out (3T Cycling, ZipVit Sport, Pace Rehabilitation), a final thank you. You make dreams possible. Same goes to each and every person that donated to my fund-raising campaigns overs the years. You made a difference.

And no thank you would ever be complete without a thank you to my partner Susan. She has stood by me patiently waiting for this day for years! Through all the races, long training camps away, and the countless day of me complaining of the pain and suffering I was going through. Thanks babe for all your support.

To those that ask me: “what next”? I have no idea. I want to stay involved in cycling somehow, but every single athlete who leaves sport and re-enters the real world can attest to, the transition is rarely a smooth one. I am open to any and all possibilities and hope that the next challenge will somehow find me. And in the meantime, hopefully can just enjoy riding a bike for fun for a while.

I'll be continuing my work not he UCI Paracycling and Athletes Commissions and working towards making the sport better for the future. Finally, I wish each and every one of my teammates the best of luck as they continue their fight for qualification for the Tokyo 2020 Games. I hope to see them all achieve their own form of greatness when they eventually get there. With a bit of luck, I'll be there commentating on their successes!